The new GlobeCore Vortex Layer machine currently has quite a large amount of uses. The casing 1 is made of nonmagnetic material and has the form of a hollow cylinder. It is placed into the work-coil 2, which creates a rotating electromagnetic field.  The work-coil is placed into the metallic jacket 3, to protect personnel from the electromagnetic field exposure.  It also performs a function of a container for liquid cooling. The cylinder sleeve 4, locates inside the casing and serves as the device process chamber.  There are ferromagnetic particles 5, inside of the sleeve. 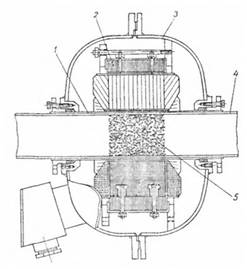 Both cyclical and continuous processes can take place inside the VLD.  In this case the required reagents are added on one side of the process chamber and the reaction products are discharged on the other side.  The ferromagnetic particles remain in the reaction zone due to the velocity layer effect (ref. to fig. 2). 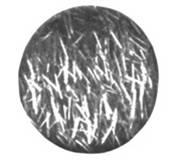 Fig. 2. The velocity layer photography (the frame rate is 1000 fps)

The advantages of the VLD include a lack of dynamic seals as well as complete sealing of the reaction zone.

The ferromagnetic particles perform complex motions under the action of forces occurring in a rotating electromagnetic field.  The progressive motions are made with frequent and abrupt changes in speed as well as the rotational motion with a variable angular velocity.  The specific character of the motion depends on many factors.   They include the rotation velocity, the magnetic field strength, the mass, the form, the dimensions and magnetic properties of the particles as well as the medium’s viscosity.

The velocity layer creation makes it possible to use the VLD in order to intensify physical and chemical processes.  Such intensification is achieved by rapid mixing and dispersion of the treated components, as well as acoustic and electromagnetic processing, high local pressure, and electrolysis.

The latest research indicates that the VLD can be effectively used for:

The VLD units are characterized by operational reliability and ease of use.  They can also be installed without the need for special foundations.  It is possible to get the VDL units to perform in many different configurations including in series and in parallel operations.